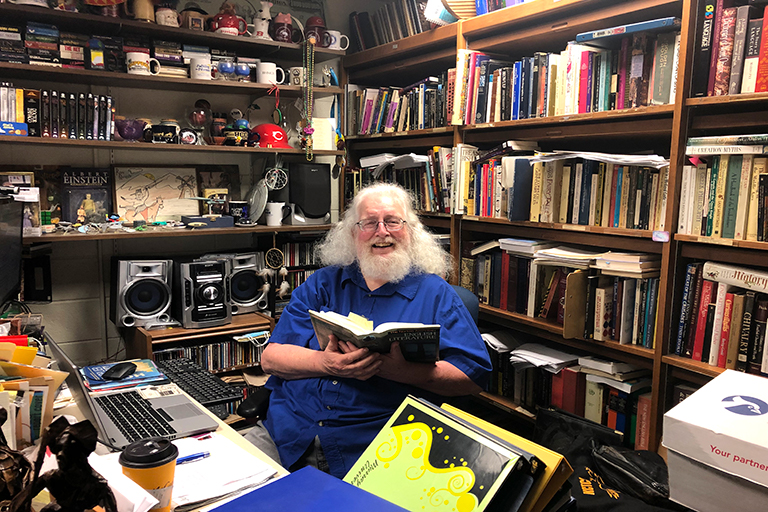 HCTC English professor Ron Reed poses with one of his plethora of books in his office on the Hazard Campus. Reed will be retiring from his position June 30.

Follow the music. That has been the best direction given to students for the last three decades at Hazard Community and Technical College (HCTC) to find the office of English professor Ron Reed, a man whose personality and intellect are only outsized by his presence. By the end of June 2021, Reed will be playing himself out as he retires from his teaching position—something he admits is both terrifying and thrilling.

“The excitement comes from knowing this is all brand new stuff for me. I’ve never been without a job, and, so, now, all of a sudden, I’m not going to have a job,” Reed says, the cheerful look most students associate with him never leaving his face. “Realizing that as of July 1 I’m unemployed. . . that’s a little scary, but I’m sure it will work out.”

Reed chuckles as he sits in his office that, over the decades, has undeniably become his own. The bookshelf-lined walls are packed full of literature and history books, all cohabitating with art—both student-made and gifted—and knickknacks. The smell of books fills the air and compliments the Ricky Nelson CD Reed turns down to background music when he has visitors.

Teaching English has always been a dream of Reed’s.

“I’ve known I wanted to teach English ever since my ninth-grade year of high school,” Reed says.

A native of Louisville, Ky., Reed and his family moved around a bit in his youth, finally landing in Tennessee for his formative school years. So, it is a bit surprising to hear that a young man from Tennessee would choose to attend a small, liberal arts school in Eastern Kentucky once he had graduated.

“My guidance counselor suggested it (Berea College). I’d never heard of it, and I said well it sounds interesting; let’s apply,” Reed remembers. “My first day at Berea was the day I was scheduled to register and all that, so I didn’t go to the campus beforehand.”

Attending Berea College seemed to ignite a love in Reed for Eastern Kentucky. He says he knew after college graduation that at some point he wanted to be able to come back to the area and make a difference—but first, he was ready to make some money.

“I was tired of being poor,” he says with a laugh.

Reed accepted a job with the retail company Montgomery Ward where, he says, starting out he was already making $300 more than his father was bringing home when Reed went away to college.

“I thought, this is wonderful. I’ve now got some money. I still remember one of my first purchases was a black and white TV,” Reed explains, measuring the small TV set size out with his hands in front of him. “I thought that was wonderful to have my own TV set.”

After working 11 years for Montgomery Ward outside of the Eastern Kentucky region, Reed and his wife, Teresa, decided it was time to switch gears.

“I now know what it’s like to make some money, I now want to do something that’s worthwhile, and so we decided to go back to grad school,” he says.

Reed and his wife managed to make full-time careers, full-time parenting of three children, and full-time grad school studies work in their favor.

“The thing that drove us was that if we were going to come back to Hazard, and we were, we wanted to be able to contribute in some way,” Reed explains

In 1987, with a teaching degree under his belt, Reed moved to Hazard, Ky., where Teresa took a job as a lawyer and he as a part-time English instructor at HCTC in Blackey, Ky. Within the year, Reed had accepted a full-time tutorial coordinator position with the college, and, by 1991, had slipped into the groove of working as a full-time English professor.

“Since then, I’ve taught full-time a variety of courses and a variety of places,” Reed says, joking that there may not be an English class he hasn’t taught “I bet that I’ve taught almost every place that the college has taught classes.”

Receiving tenure in 1996 gave Reed the freedom to expand his teaching methods and curriculum.

“My favorite class to teach early on was honors, and I liked that because it gave me some freedom to choose different topics. My favorite student evaluation of all time was ‘I’d give him a 78. He’s got good rhythm and I can dance to him,’” he remembers, laughing and explaining that the comment was in reference to American Band Stand, a show that asked young people to score a song or record.

Having worked as an English professor for more than three decades, Reed says it’s hard to pick out one student or one moment in a class that stands out in his memory.

“For me, it meant a lot when students smiled or laughed in class because it meant that they were engaged, and I like that. So, there are lots of times when something was said that I thought was absolutely delightful or quite insightful and that sort of made my day when that happened,” he says. “There are thousands of moments like that. I thought, as long as they were engaged then the possibility of their getting something out of the class was increased.”

Reed has lots of plans for his future in retirement, including taking mandolin lessons and eventually becoming a student at the HCTC Kentucky School of Bluegrass and Traditional Music, as well as traveling with his wife and generally enjoying his time and family.

First, though, he plans to tackle the deconstruction of the little world he has created in his office space. Reed points to a quilt displayed on the wall that a student made in a past literature class, then drawings leaned against the wall from an honors class, and a tapestry hanging by his door.

“I’ve had students who have interpreted literature in so many ways with these things, so, I’ll always keep those things with me,” he says.

The former Pearson Trio bandmate reiterates the importance of both literature and music in his life and says that though he is retiring, that will not change. He adds that he may return to teach someday, but his priority is to continue his writing and musical ventures.

As he reaches over to let Ricky Nelson continue his performance, Reed explains why it was such a simple and fulfilling task to remain at HCTC and in Hazard, Ky., for so many years.

“For me, HCTC is like a family. I had a family here at the college—a family that consisted of colleagues and students and staff—and then I had a family at home,” he says. “I was very lucky to be able to go from family to family and to feel like I was contributing in some way. The idea of people, of being a family, is important to this college, and I know that it will continue.”